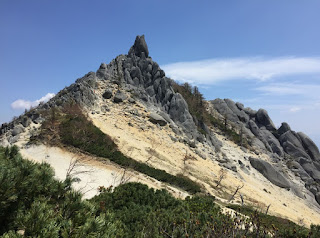 The Hōōsanzan, or the three peaks of Mt Hōō, sit on the eastern edge of the South Alps of Japan in the centre of Honshu island. Like their neighbour to the north, Mt Kaikomagatake (甲斐駒ケ岳), they are made of granite and this gives their exposed summit ridgeline a distinctive white colouring. From a distance, this gives them the appearance of being snow-covered, even in mid-summer. 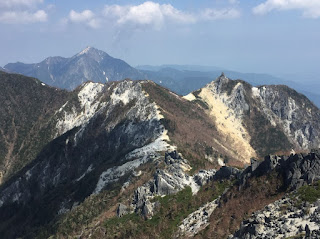 From south to north the three peaks of Mt Hōō are Yakushidake (薬師岳 2780m), Kannondake (観音岳 2840m, the highpoint of the massif) and Jizōdake (地蔵岳 2764m). The ridgeline connecting them is one of the most beautiful of the Japan Alps, and is easily accessible from Tokyo for a day trip or an overnight stay in one of several mountain huts. It is highly recommended, either as a hike or a trail run.

Perhaps the most interesting of the three peaks, however, is Jizōdake. On its summit is a rock formation that is unique and visible from the valley floor and from a Chuo Line train, and which has become something of a symbol for Yamanashi prefecture. It is known as the Obelisk (オベリスク), and in addition to its striking appearance, it has the distinction of being the first recorded recreational rock climb in Japan. It’s first ascensionist was none other than the venerable Rev Walter Weston, who is credited with introducing the Japan Alps to the world through his 1896 book “Mountaineering and Exploration in the Japanese Alps”. 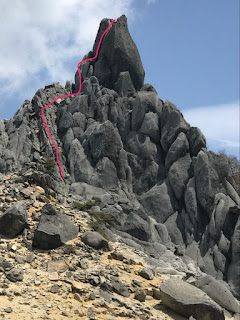 The circumstances of the 1904 first ascent of the Obelisk are quite interesting, so it’s worth quoting the passage on it from the English-language version of Fukada Kyuya’s “Nihon Hyakumeizan”:

“A tall chimney is formed where the rock pillars lean together. After an inspection, Weston realized the only chance of success lay in getting up the convex angle of the lower pillar. He got his companion to press his ice axe against his feet to steady him as he stood on a small ledge, then began to bombard the top of the crack formed by the stone pillars with a stone tied to the end of his eighty feet of alpine climbing rope. After half an hour of disheartening effort, a lucky shot went home. Grasping the rope in his left hand, he then fought his way upward until he reached a protruding block where the rope could afford no further help. The he committed his whole weight to the obstruction above and, after a struggle, hauled himself onto the top of the lower rock. From here to the actual highest point was comparatively easy, for though the way up was almost vertical, the holds were good, and Weston was able to finish his climb in good style. This may be our country’s first act of alpinism, and it is certainly its first recorded rock climb.”

The author nearing the top of the Obelisk: 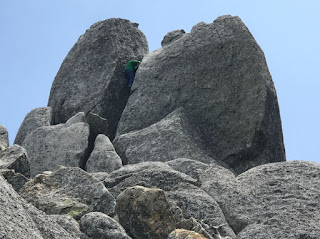 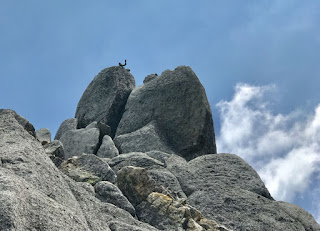 The view south to Kannondake from the top of the Obelisk: 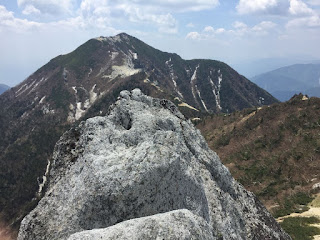 The good news for any aspirants today is that it is not a very difficult climb. However, it should be pointed out that just as what goes up must come down, getting to the top of the Obelisk is by far the easier half of the journey. In normal years there is a fixed rope hanging down the final crack that Weston aided up, but as of 10 June 2017 at least, the fixed ropes have all been removed. What remains now is two short sections of in-situ chain, the lower of which appeared to be secured by nothing more than one of its links jammed into a constriction in the crack. There is a gap of several metres between these two chains, and the move to gain the upper chain requires a level of commitment that may be beyond anyone without a reasonable amount of rock-climbing experience and a good head for exposure. Even with those two qualities it is doubtful that the experience of climbing back down will be a pleasant one. If in doubt, it might be better to leave it for another day and come back with a rope, a belayer and a couple of small cams just to be safe. 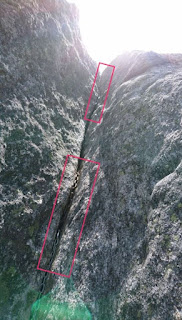 (NB: For more of Fukada Kyuya’s description of the Hōōsanzan and the Obelisk of Jizōdake, pick up a copy of Martin Hood’s excellent English translation of the “Nihon Hyakumeizan”.) 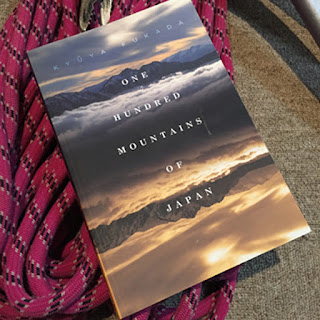 *** If you'd like to support Climb Japan, you can order a copy of the guidebook "10 Classic Alpine Climbs of Japan" from Amazon in either Kindle e-book or print formats. Many thanks! *** 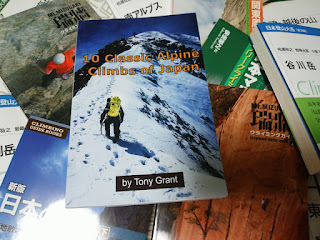 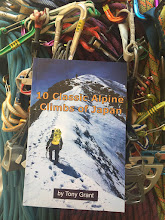